There are so many species of small wildlife in Canada we can not list them all here. Many can become a nuisance or a danger in some cases, and need to be effectively controlled. Here are some common small wildlife our pest control company often encounters in Canada.

Bats are mammals that belong to the order Chiroptera. They are 6 to 10 cm in length and have a wingspan of up to 27 cm. Bats have small, furry bodies with long, membranous wings, and prominent ears. While bats are commonly believed to be blind, they can see but have fairly poor eyesight. Bats often roost on and in homes and other structures, where their droppings, called guano, can cause major problems. Sufficient guano buildup can cause ceilings to sag and collapse, while the droppings stain walls and allow for the growth of histoplasmosis, a lung disease in humans. Bats can use their sharp teeth to bite when threatened, allowing for potential transmission of rabies, a disease of the nervous system in humans and other mammals such as pets. Bats can also transmit other serious diseases, such as nipah, ebola, lyssavirus, and hendra viruses. Because attempting to handle bats may result in illness or injury, it is best to employ the services of a trusted and reputable professional pest control company, like Major Pest Control, to ensure treatment plans comply with the Fish and Wildlife Act.

The scientific name for groundhogs is Marmota monax. They are also known as woodchucks or whistle-pigs. Groundhogs grow up to 70 cm in length and have brown or gray fur, stocky bodies, and long, bushy tails. They prefer prairies and open forests but will invade neighborhoods in the suburbs when they provide plentiful resources. Groundhogs are omnivores (eat nearly anything), and their diet includes vegetation such as grasess, clover, alfalfa, dandelions, fruits and vegetables from gardens, as well as animals such as snails, grasshoppers, and grubs. Groundhogs cause problems around properties mainly as a result of their digging to create burrow holes which causes structural damage to yards, decks, and outbuildings. Additionally, groundhogs carry numerous parasites, such as ticks, fleas, lice, botflies, and chiggers. They may also transmit pathogens that cause diseases in humans and pets, such as rabies and tularemia. When threatened, groundhogs will bite, claw, and scratch. For these reasons, groundhog removal is best achieved by employing the services of a trusted and reputable professional pest control company, like Major Pest Control.

The scientific name for the Virginia opossum is Didelphis virginiana. They are also referred to as possums. They are the only North American marsupial, meaning they give birth to live, underdeveloped offspring (called joeys) that finish their development in a pouch called a marsupium. These are medium-sized animals up to 55 cm in length with fur that is primarily gray and may be streaked with red, brown, or black. Opossums have a long, pointed snout with a pink nose, prominent whiskers, black eyes, short legs, and long, hairless tails. Opossums are adapted to live in a variety of habitats across Canada including those found in urban and suburban environments. They are opportunistic omnivores (eat nearly anything), from vegetation, fruits, seeds, and grains to animals such as insects, earthworms, birds, and frogs. When their usual food sources are unavailable, opossums will consume carrion, garbage, and pet food left outdoors. They can cause problems around residences by entering buildings searching for suitable dennings sites. When they set up their dens, they can damage insulation and ductwork, and they leave behind droppings. They may also damage lawns, steal from gardens, knock over trash cans, and consume pet food left outdoors, as well as threaten the safety of pets. Opossums carry diseases that can affect humans and pets, including leptospirosis, tularemia, spotted fever, tuberculosis, Chagas disease, and rabies. They also carry parasites, such as fleas, ticks, mites, and lice, that can be passed on to pets and humans. Although opossums often play dead when threatened, they can scratch and claw and may bite with their more than 50 sharp, serrated teeth. Trapping and relocation of opossums is illegal in most areas. For these reasons, opossum removal is best left to a trusted and reputable pest control company, like Major Pest Control.

The scientific name for racoons is Procyon lotor. They are medium-sized mammals that grow up to 95 cm in length, have gray to reddish-brown fur, with bushy tails bearing black rings and distinctive black mask-like markings on their faces. The front paws of racoons work in a similar manner to human hands. Racoons are extremely well adapted to urban and suburban environments where they may encounter humans and pets. Raccoons will set up dens beneath decks, in unused buildings, and in outbuildings. When infesting structures, racoons are detected when they make noise, such as scratching, rustling, and squeaking or other vocalizations, when they awake in the evening hours for their nocturnal activities. In addition, raccoons create latrines near dens which they use for excretion, leading to foul odors that indicate an infestation. Racoons are intelligent and will readily bite, claw, and scratch if they feel threatened. Racoons carry parasites, such as roundworms, fleas, ticks, and mites, and they may harbor a number of pathogens that can cause potentially fatal diseases in humans and pets, including rabies, leptospirosis, and giardia. The latrines created by raccoons also increase the health risks associated with an infestation as many of these parasites and disease may be transmitted through feces. For these reasons, racoon removal should only be accomplished by employing the services of a trusted and reputable pest control company, like Major Pest Control.

The scientific name for the striped skunk found in Alberta is Mephitis mephitis.  They are small mammals that are 50 to 80 cm in length, have black fur and long, fluffy tails, bearing distinctive white stripes that run along their backs and down their tails. Skunks have a well-known defense they use when they feel threatened: they spray a foul-smelling, sticky liquid that is persistent for days and difficult to remove. Skunks are adapted to urban and suburban environments where they may encounter humans and pets. They raid trash cans, gardens, outdoor pet food, and compost piles when foraging for food. Skunks are opportunistic omnivores (eat nearly anything) including rodents, eggs, insects, worms, and plants, as well as taking advantage of human-derived food sources such as garbage and fruits and vegetables from home gardens. Skunks carry parasites such as fleas, ticks, and mites, and may transmit rabies. For these reasons, in addition to their spraying defense, it is best to contact a trusted and reputable pest control company, like Major Pest Control, to ensure safe and humane removal of skunks from your property.

Squirrels belong to the family Sciuridae. There are many different kinds of squirrel species found in Canada: six ground squirrel species, four tree squirrel species, and two species of flying squirrels. Tree squirrels cause the most problems for property owners, and there are two predominant species in Western Canada: Eastern gray squirrels (Sciurus carolinensis) and American red squirrels (Tamiasciurus hudsonicus). Squirrels are small mammals that grow from 10 to 70 cm in length, have red, brown, gray, or black fur, and have slender bodies with long, bushy tails. Tree squirrels inhabit dense forests and nest in the treetops. Squirrels are well adapted to urban and suburban environments where they often encounter humans and pets. Squirrels will often nest in and around homes and other residential structures. Squirrels build different kinds of nests: dreys (loosely woven balls of twigs, leaves, and grasses) and dens (squirrels’ year-round primary residences that are created in cavities). Squirrels in human-dominated habitats will frequently build nests in the attics and chimneys of homes. Nesting squirrels can quickly create damage to the building as the result of gnawing on wood and electrical wires and depositing droppings all around. Squirrel infestations are typically discovered when residents hear scurrying in the attic in the day. Squirrels carry parasites, such as fleas, ticks, and mites, which may transmiut diseases to humans and pets, including tularemia, typhus, plague, ringworm, Lyme disease, encephalitis, and Rocky Mountain spotted fever. Squirrels may become aggressive when they feel threatened, making trapping them dangerous. For these reasons, employing the services of a trusted and reputable pest control company, like Major Pest Control, is the best way to safely and humanely address squirrel infestations on your property.

Are you looking for help with controlling nuisance wildlife? We’re here to help. 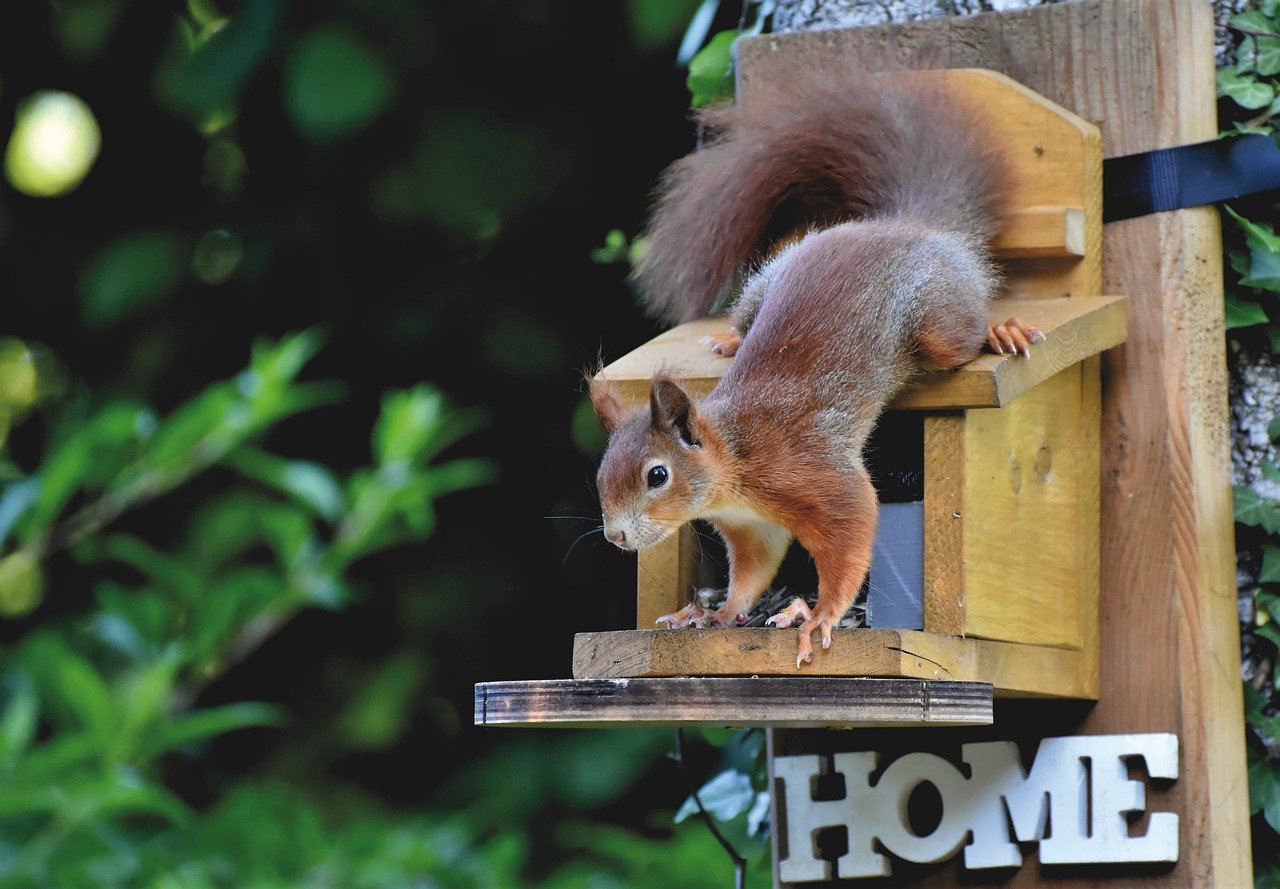