More than 100 species of ants are found in Canada. Some of these species are “structure-infesting”, having the ability to reside in and around your home. The most common species of structure-infesting ants in Canada are carpenter ant, odorous house ant, pavement ant, Argentine ant, pharaoh ant, acrobat ant, and thief ant.

Carpenter ants, pavement ants, and pharaoh ants are responsible for most problems in the home in Alberta. The species most associated with structural damage is the black carpenter ant, which is also the largest in size. When nesting indoors, pavement ants tend to be more of an annoyance than causing structural damage. Similarly, pharaoh a0nts are an indoor nuisance pest and are attracted by foods high in protein and sugar.

Acrobat ants belong to the genus Crematogaster, are less than 5.5 mm in length, have heart-shaped abdomens, and emit an odor when disturbed. When found outside, acrobat ants establish colonies near moisture: under rocks and in rotting wood such as stumps or woodpiles. When infesting indoors, acrobat ants typically nest in moist areas like in foam insulation behind siding or where water leaks have damaged the structure.

The scientific name for Argentine ants is Linepithema humile. They are about 2.5 mm (+/- 3 mm) in length, have smooth, hairless bodies and are light to dark brown. Argentine ants are found outdoors in soil, under wood and logs, and in the cavities at the base of trees and shrubs. While Argentine ants are omnivorous (can eat nearly anything), they seek out foods that are sweet.

Carpenter ants belong to the genus Camponotus, are between 3 and 13 mm in length, have a rounded thorax and prominent mandibles, and are brown, black, or red and black in color. Carpenter ants nest both indoors and outdoors in moist, rotting wood. Unlike termites that eat wood, carpenter ants remove wood, depositing the debris in small piles outside their nests.

The scientific name for odorous house ants is Tapinoma sessile. They are between 2 and 3 mm in length and are dark gray or brown in color. Their name is derived from the rotten odor they emit if crushed. Outdoors, odorous house ants live in shallow nests established on beaches and in swamps and bogs. Indoors, they are attracted to warmth and moisture and will colonize within walls, around hot water pipes and heaters, and under sinks and bathtubs. Odorous house ants are highly opportunistic and are active year-round in Canada.

The scientific name for pavement ants is Tetramorium immigrans. They are between 2.5 and 3 mm in length, have visible grooves on their head and thorax, have one pair of spines on their thorax, and are pale brown to black in color.Their names is derived from their tendency to establish nests under sidewalks, driveways, and building foundations. A common sign of pavement ant activity is a mound of displaced soil near a paved area. Pavement ants may establish nests

The scientific name for pharaoh ants is Monomorium pharaonis. Workers are 2 mm in length and yellow to light brown in color, while queens are 4 mm in length and reddish in color. Queen pharaoh ants, which are twice the size of workers, have enlarged abdomens that are somewhat darker in color compared to the rest of the body. Before mating, queen pharaoh ants have wings which they shed after mating. Pharaoh ants are sometimes overlooked due to their small size and inconspicuous color, allowing them to infest structures. They establish nests in areas with moisture, such as kitchens and bathrooms, and use plumbing pipes and electrical lines within walls to forage in other rooms.

The scientific name of thief ants is Solenopsis molesta. They are also known as “sugar ants” or “grease ants”. Workers are 1.5 mm in length (+/- 3 mm), while queens are 6 mm in length. They are yellow to light brown in color and have two nodes between the thorax and abdomen. Thief ants are commonly mistaken for pharaoh ants. An important distinguishing feature are the antennae that are comprised of 10 segments terminating in a 2-segmented club. Their name is derived from their habit of stealing resources and offspring from neighboring colonies. Thief ants forage long distances but are not attracted to sweets. They are resistant to conventional ant traps and to most insecticides. Colonies that establish within structures may be overlooked for a long period due to their small size and inconspicuous color.

Why Do I Have Ants?

Many of the 100 species of ants found in Canada are foraging ants that travel long distances away from the nest in search of food. They are attracted by food in the home and enter to forage for crumbs and spills or other edible items they may encounter. Ants enter buildings using cracks in walls or the foundations or any other gaps and small openings where plumbing or electrical lines enter the home. Many ant species are able to continue infesting once they have gained entry by following an invisible scent trail that scouts produce when searching for food.

What attracts ants to your house?

Can ants build nests in walls?

Yes, ants can build nests in your home’s walls, particularly if there are any cracks or crevices present.

Several ant species have jaws capable of biting through human skin, although most cannot. Black carpenter ants are known to bite when provoked. Other ant species, such as European fire ants, also inject formic acid into the bite wound that results in a burning sensation at the wound site.

How do I stop ants from getting into the house?

You can reduce ants’ interest in your home by eliminating sources of food, moisture, and nesting sites: promptly clean up food spills, use air-tight containers for food storage, promptly clean up and remove pet dishes and food, seal cracks and crevices, repair water leaks, and trim landscaping to prevent vegetation from touching the home.

How do I get rid of an ant nest?

Upon discovery of an ant nest, you can treat it with an appropriately labeled pesticide which immediately kills all members of the colony (queen(s), workers, pupae, and larvae). If you’re unable to determine the nest’s location, you can use an appropriately labeled ant bait to bait foraging ants. Workers that encounter the bait will take it back to the colony where the other members eat it, killing all colony members. To achieve elimination, it is imperative to consistently use the correct type of bait.

How do I get rid of ants in my house?

Eliminating ants is difficult because ants are social animals with large colonies. The use of sprays and baits can help in killing some of the ants you see but is unlikely to control the colony. Several species of ants require professional pest control, such as black carpenter ants. Major Pest Control is a trusted professional pest control company that can eliminate ants from your home with safe and effective extermination services available 24/7 from our trained pest control specialists.

Where Do I Get Help For Controlling Ants?

If you need help with ant control, reach out to a qualified pest control expert in your area, such as Major Pest Control, that serves clients across western Canada, and Guarantees their work.

Are you looking for help with ants? We’re here to help.

We’re happy to help where we can. Reach out to us for a quote on ant control, and remember we guarantee your satisfaction with our pest control services, or they are 100% free. 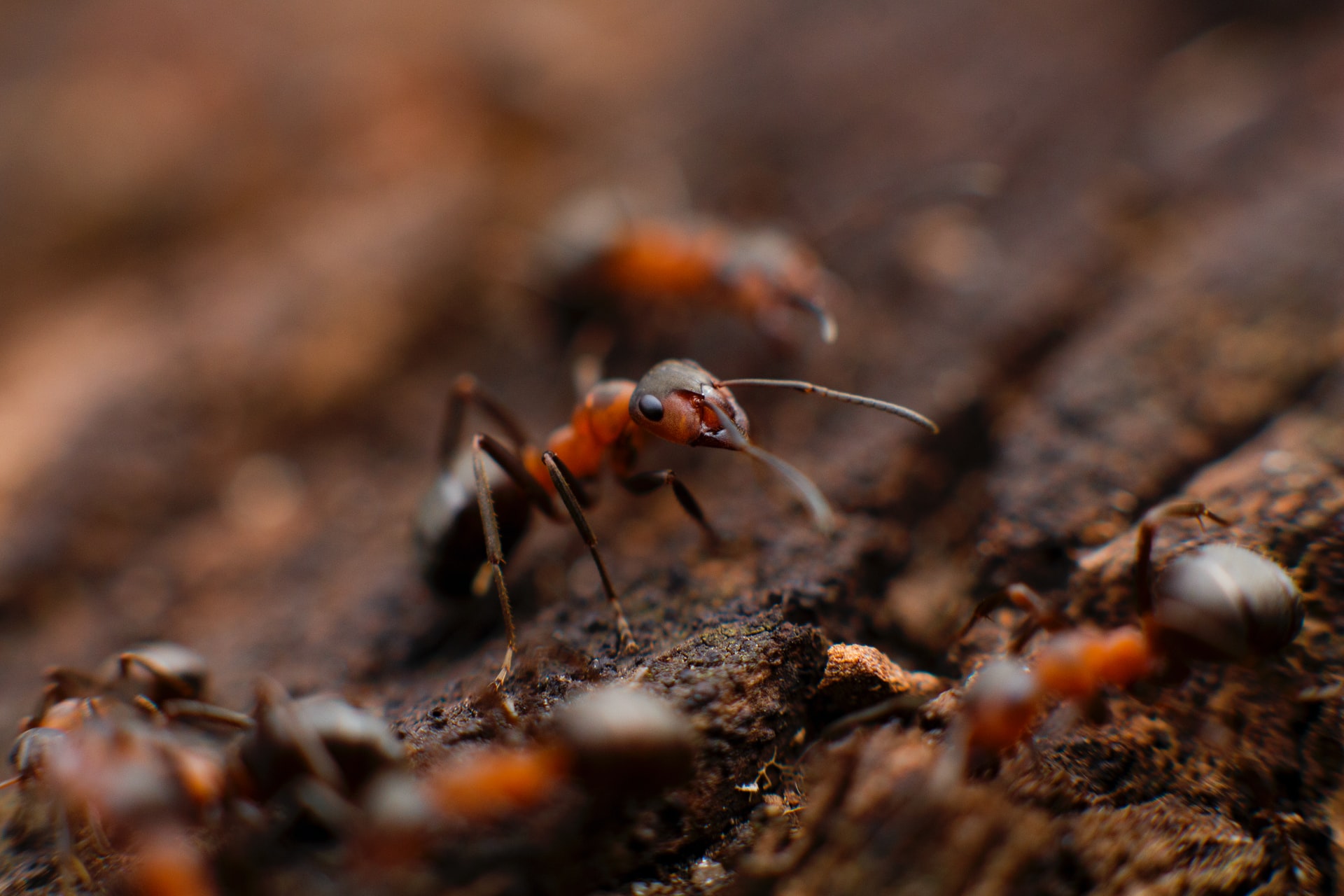 Article Name
All About Ants - Pest Library Canada - Ants & Ant Control
Description
Common Types Of Ants In Canada. Why they like your house, lawn, and garden, and how best to control them. Frequently asked questions about ants. Answered by a certified associate entomologist. Pest Control In Canada. Courtesy Of Major Pest Control Canada.
Author
Major Pest Control